The Liberal Party of Canada hopefully has received a wake up call that it is no longer the natural governing party of Canada.  Now is a time of renewal as indicated in this editorial.

The people leading the renewal of the party have to look beyond appealing to the rent seekers and influence peddlers who have shaped the party policy in recent years.  This stance had led the party into a political dead end.

In times past, the Liberal Party has been a positive influence in Canada for advancing meritocracy and social mobility.  Those days may be long in the past, but they are still a history that the party can draw upon for renewal.  The party has to reach back into its past to find the principles that people should advance based on their skills and capabilities instead of their inherited privileges, social standing and ethnic/cultural background.

The election of Ruth Ellen Brosseau as NDP MP for the Quebec riding of Berthier-Maskinongé exposes how the gap between voters and the elected mostly benefits party bosses.

With a newly elected majority government, the Conservative party has the opportunity to pursue an ambitious reform agenda to address the major policy problems facing Canada.

Some used to complain that the federal subsidies to political parties (initiated under the Chretien regime) were artificially supporting the Bloc Quebecois.

By granting parties revenue from the public purse, the federal state kept the Bloc alive beyond its natural life, the argument went. In a well-received Frontier Centre backgrounder in October 2008 Mark Milke made the case in the language of unintended consequences:

Whether one supports of opposes the use of tax dollars to fund political parties, an unintended consequence of public financing for political parties is that the Bloc Quebecois’ finances were greatly helped out by such schemes. 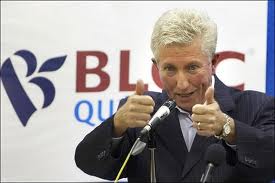 This is the view that Eric Duhaime advances in this piece entitled “Fermez la shop,” suggesting that the BQ is done.  Duhaime argues that Bloc dependency on federal funding created the conditions of complaisance in which the party lived of lately.   Only 19% of the Bloc’s finances came from funds raised from party members and militants.  The rest, 81% came from the feds.

It seems clear that the 2011 federal election is about to change significantly the electoral map of Canada, for better or for worse

A close look at the polling data by region may not warrant the excitement of a possible Layton government resulting in the upcoming election on Monday. Three days to go!

A look at Mancur Olson’s theory of why smaller lobby groups seem to persistently outmanoeuvre the wider voting public at election time.

Gairdner’s worry about persistent deficit spending, smothering socialism, the Charter of Rights (which granted additional rights without giving Canadians balancing responsibilities) and loss of traditions led (after five rejection letters) to The Trouble With Canada -plus a string of other books and a reputation as the guy who helped jumpstart a pendulum swing toward conservative values.