Today the Frontier Centre released the backgrounder Toward More Prosperous Cities by Wendell Cox. The objective of public policy should be to achieve wide-spread affluence and eradicate poverty. Cities, urban policy, and urban transport are means to facilitate this objective, not ends themselves.

Political instability is a major impediment to business and investment on First Nations reserves in Canada. It is a problem right up there with land ownership restrictions and lack of access to capital. This is also a problem identified on …

President Obama’s pledge to increase the national minimum wage has spurred a vigorous debate over how to improve the living standards of low skilled workers. Economists are skeptical of minimum wage increases, pointing out that they increase unemployment. They tend to advocate an earned income tax credit (EITC) as an alternative.

One paradox of the Obama Presidency is how it has retained the support of young people and minorities despite the damage its policies have done to their economic prospects. In his latest attempt to increase the minority youth jobless rate, President Obama is proposing to raise the minimum wage.

I once heard a wise man say that governments are always wrong when making economic predictions.  The questions to consider are by how much, and in what direction?

That the Government of Alberta was wrong in its economic predictions should therefore not be big news.  But they were wrong by lots and widely in the wrong direction.  Alberta was predicting averages around $99 a barrel for the past year.  But it was not that prediction that got them in trouble, now facing a likely deficit near the $6 billion mark.

It appears to be the failure to account for the rising price differential –the difference between market prices and the bargain basement price Alberta needs to sell its oil to the United States because of our lack of pipeline capacity to deliver to markets. It’s what the premier called  a “bitumen bubble.” The price differential is not new, and for more than a year, economists were predicting a larger gap unless greater capacity to carry oil to market were developed.

The core of the problem lies elsewhere, whatever the premier says: Two successive Alberta governments for close to a decade have now been unable to balance their budgets at times when oil revenue was riding high.  When money abounds and one still runs out of it, it is a clear indication that the problem is not revenue. The problem is spending. 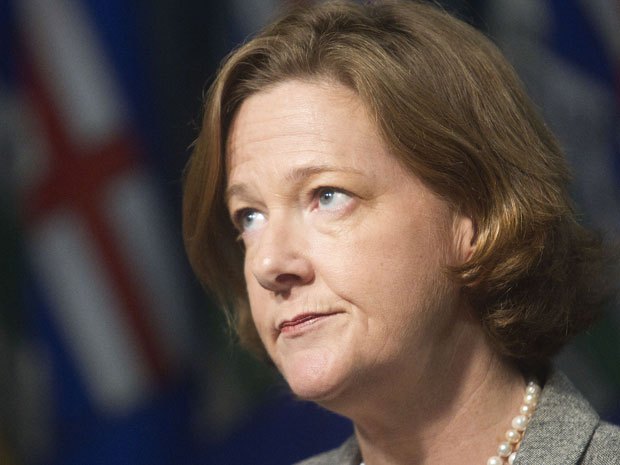 Jack Mintz from the School of Public Policy and other keen observers had predicted that we would be at this precise junction around this time.  Keep spending more than you have while you bridge gap with a supply of money the flow of which you cannot control, and it is not difficult to see that when the gap-closing supply goes down so does your ability to keep spending in the same undisciplined way.

And down that hole we now go, raising the spectre of budget cuts and higher taxes. Not quite a cliff, as a friend of mine joked, but surely a Buffalo jump. Yet, the government is still not facing reality for all the reality facing it.

In her televised address last week, the premier keeps promising not to raise taxes, and not to reduce the budget lines of the two largest spending departments, healthcare and education, to deal with the $6 billion gap.  Fair enough, but the promise to start putting savings into the Heritage Fund quickly gave her talk a hue of unreality.

The recent protests in India are very different from those of a generation ago, in the 1960s-70s, when protesters, mostly from the slums, shouted ‘Roti, Kapra and Makan’, which means “Bread, clothes and housing”. Today, India is an economic giant …

A few blocks from where I work, there’s a guy who lives on a sidewalk in the Financial District. That guy is incredibly expensive. For the amount we pay in social services to keep him alive, he could practically move into the Ritz. The yearly cost of caring for a homeless person with substance abuse and mental issues (that is, most of them) ranges from $55,000 up to $134,000, according to various research studies.

The government is always making “important announcements.” Every press release is labelled as such, even if it’s (as on Tuesday) merely funding for snow-grooming equipment for a quad riding club in Quebec. To be fair, that was probably judged “important” in Victoriaville, Que., if nowhere else.

California voters have apparently defeated Proposition 37, a ballot measure that would have mandated labeling of foods made from genetically modified crops. While on the surface there is nothing wrong with a voluntary labelling scheme. This is much better than …