“Ahead, Thar Be Dragons.”   The world of 2023 is a scary place. One major war is raging, with others probably on the way. The Pax Americana that has given us freedom of the seas and allowed global trade to …

Executive Summary The various federal political parties are all promoting the policy agendas they believe will foster a sustainably high quality of life for all Canadians. It remains to be seen whether they will attain the success that they aim …

Water is still a major issue on many First Nations across Canada, but should Manitoba bands be overly concerned? Just recently, Tsal'alh First Nation, a B.C.-based band, announced they are banning the sale of bottled water in their community. The …

The debate over fracking continues to be lively, and there’s a lot of misinformation out there. Fracking, or ‘hydraulic fracturing’, is the injection of water, sand and chemicals at high pressure into underground rock formations, to release trapped natural gas. …

Introduction On 25th of September, the citizens of Regina will vote in a referendum for the first time in 20 years. The question? Whether the city should use a traditional contract to construct a new wastewater treatment plant or to …

On Thursday, the province announced a new “Lake Friendly Accord” intended to leverage $1 billion worth of investment into ways to improve the ecological state of the vast Lake Winnipeg watershed, which stretches from the Rocky Mountains in the west down to the edge of South Dakota and then east into Canadian Shield between Atikokan and Thunder Bay.

Last night I attended a Regina city council meeting where the usage of a Public Private Partnership for the construction, operation and maintenance of a new waste water treatment plant was discussed.

The Hon. John Baird, then Minister of the Environment, in whose watch the mandatory policy for CFLs was adopted.[/caption]

Among concerns about the health dangers of Compact Fluorescent Light bulbs (CFLs), which contain mercury, the Alberta Government continues to promote the product in its  efforts to green itself and the world. The light bulbs are a good example of how elected officials and civil servants  –eager to jump on the environmental bandwagon for the sake of political appearances– put people at risk and damage the natural environment in whose name they adopt such misguided policies.

Recycle and use compact fluorescent lightbulbs (CFLs). If every household in Alberta changed just one light bulb to a CFL, it would be the same as taking the emissions from 66,000 cars off the road. 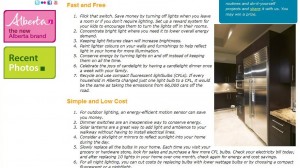 One Simple Act, the Alberta Government site promoting the virtues of Earth Hour, passionately recommends the use of the health-hazardous CFLs.[/caption]

They go on to advise further:

In spite of this damning Health Canada report [in pdf] dating back to February 2012, the information the Alberta government offers makes no mention of the significant risks involved.