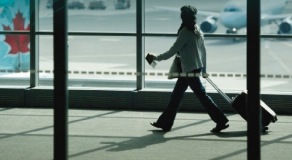 When in 2004, American low-cost carrier, Allegiant first noticed that half of its passengers at the border airport in Bellingham were Canadian, it quickly strategized to lure even more Canadians with “cheaper fares, different choices and cheaper parking.” Soon other U.S. low-cost carriers were chasing the same market at the dozen or so airports just south of the Canadian border. The strategy, to attract even more Canadian passengers, had an added bonus: the carriers didn’t even have to come to Canada, Canada came to them—at the rate of about five million passengers a year. Since then, several U.S. cross-border airports have either expanded or are in the process of doing so.

Canadian carriers are not to blame. U.S. departure flights are cheaper —by an average $428 for a round-trip ticket—because of a dormant air transportation policy in Ottawa. In the U.S., a different view reigns. With commercial aviation generating nearly nine per cent of domestic jobs in the U.S., air transportation is seen as critical to economic growth, jobs and trade. They see improving and expanding the air sector as a national priority. Canada, by contrast, considers its air industry a source of tax revenue. The lack of competitive policy in Canada is resulting in job loss and reduced regional and GDP growth.

Two factors fuel higher ticket prices in Canada. First, Canadian air tickets are ratcheted up with federal taxes. As a result, this portion of the ticket is close to three times higher than a corresponding U.S. ticket. Second, base fares are substantially higher because of factors, such as higher Canadian airline labour wages, lower labour productivity, a less favourable tax regime and a narrower capital market.

A significant factor fuelling higher base fares is the anti-competitive stance taken by Ottawa on the entry of foreign carriers to the market. Although Canadian carriers deserve consideration, Canadian cities and consumers are surely worth equal weight in determining Open Skies issues. When dealing with the protection of international alliances, the alliances’ interests should receive less weight than Canadian cities, their economies and travellers. Domestic competition could be enhanced by allowing a new foreign carrier to enter the market.

Virgin’s entry in Australia (now Virgin Australia Airlines) stimulated the domestic market and resulted in Australia experiencing some of the lowest domestic air fares in the world.

The five million Canadians who cross the border to fly U.S. carriers every year should signal to the federal government that new policy is required.